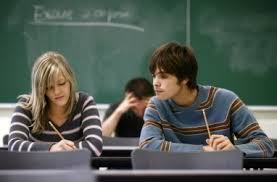 MW we have an honor code and we take it fairly seriously.  The honor code acts as a signal in the marketplace that a UMW grad has a code that they abide by.  I was talking to a colleague of mine who had found out that a student had cheated on a minor assignment and subsequently my colleague had reported the student to the honor council.  The student was upset, being caught didn’t upset her as much as the perceived disproportionate response by the professor.  The assignment was only worth a few marks, was it really worth jeopardizing the student’s entire academic career over one small assignment?  There are people who can use a moral, ethical, or even philosophical argument to say yes.  I can’t speak intelligently on any of those subjects so I’ll make an economic argument.  The professor isn’t trying to harm the student that cheated, he’s trying to protect the students that didn’t cheat.  Here’s how this works.

At some point the student that cheated will either go to grad school or find other gainful employment.  Two things can happen now.  Firstly, if the student can break the rules in college and get away with it then this increases the probability that the student will engage in similar behavior after they graduate.  Secondly, the student hasn’t actually learned the material that they claim to know.  Let’s assume a couple of things at this stage, in regards to businesses and grad schools 1) they don’t want people that break the rules, and/ or 2) they want people that know what they say they know.  The challenge for businesses and grad schools is how to differentiate the good (honest) grads from the bad (dishonest) ones.   An honor code can differentiate a UMW grad because it’s a signal that this student has spent four (or more) years abiding by a code where they acted honestly and admirably.  In a market where so many people only do what’s in their own personal best interest it’s hard to find those who will do honorably even when they can benefit by not acting honorably.  If this signal that is the honor code is going to become a student’s advantage then we have to enforce it rigorously.  If a student can cheat at a school that values the honor code then really we’re losing a big advantage over schools which take a more lenient stance to cheating and/ or which do not have the honor code that we do.  In today’s market where grad schools and jobs are increasingly competitive wouldn’t it be great if students had a competitive advantage simply by acting honorably?  This can and does happen but it only works if we take a stand against those that would violate it.